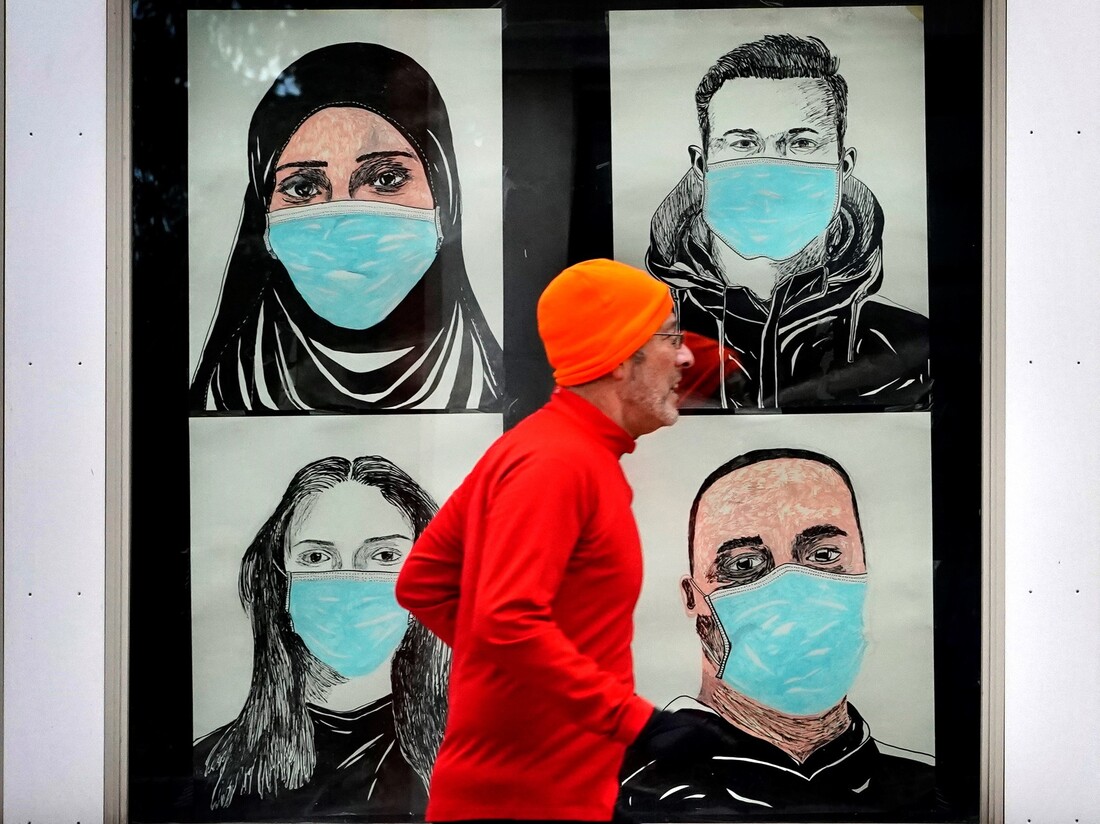 As health care professionals grapple with soaring numbers of COVID-19 cases across the country, they’re also combating another quick-spreading and frustrating contagion: misinformation. 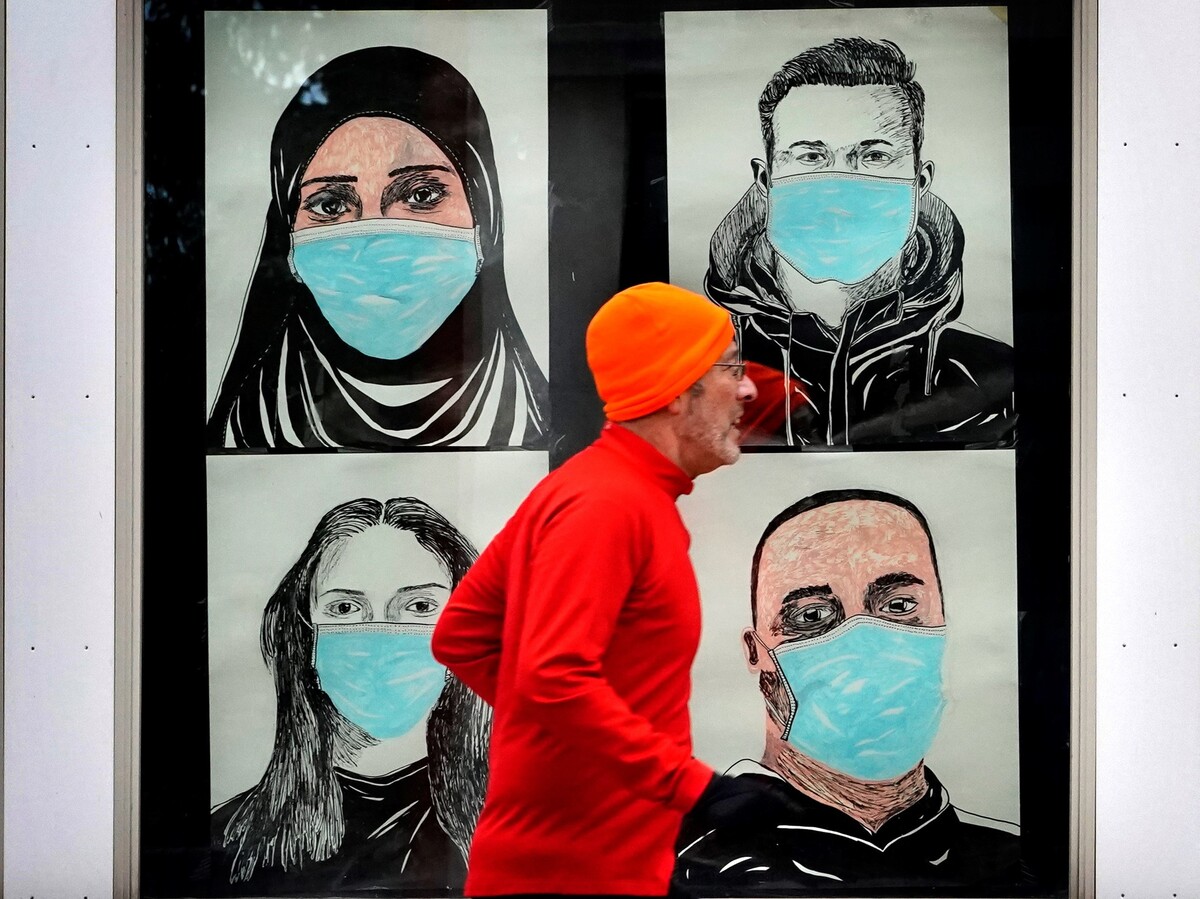 As health care professionals grapple with soaring numbers of COVID-19 cases across the country, they’re also combating another quick-spreading and frustrating contagion: misinformation.

And still, Craig Mann walked out of the grocery store, past the signs and toward his truck, maskless and resolute.

The pandemic that everyone’s talking about?

“It’s absolute garbage,” he said. “There has been plenty of proof that the coronavirus ‘pandemic,’ if you will, links back to Communist China. It’s communist Marxism that they’re trying to push on this country.”

As health care professionals grapple with soaring numbers of COVID-19 cases across the country, they’re also combatting another quick-spreading and frustrating contagion: misinformation.

“I don’t know, I can’t decide if it’s a conspiracy theory or not,” said shopper Shauna Unger, outside of the same grocery store. “I don’t known what’s really happening. It doesn’t seem like it’s as critical as everyone’s making it out to be.”

A few cars down, Marvin Loftis removed his mask to say that he thinks the virus is a joke. “It’s just another cold,” he said.

A survey by the Pew Research Center earlier this year found that a quarter of U.S. adults believe that there’s at least some truth to a conspiracy theory that the coronavirus pandemic was intentionally started. Others allege that the outbreak isn’t as bad as reported; that a quarter million Americans haven’t died. Official narratives and figures are questioned.

“These conspiracy theorists and these groups who are against [masks] have been so vocal on social media that at some point, it starts to resonate with people and starts to have as big of a voice as the medical community – if not more,” said Anita Kisseé, the public relations manager for St. Luke’s, the largest hospital network in Idaho, where coronavirus cases are also surging. 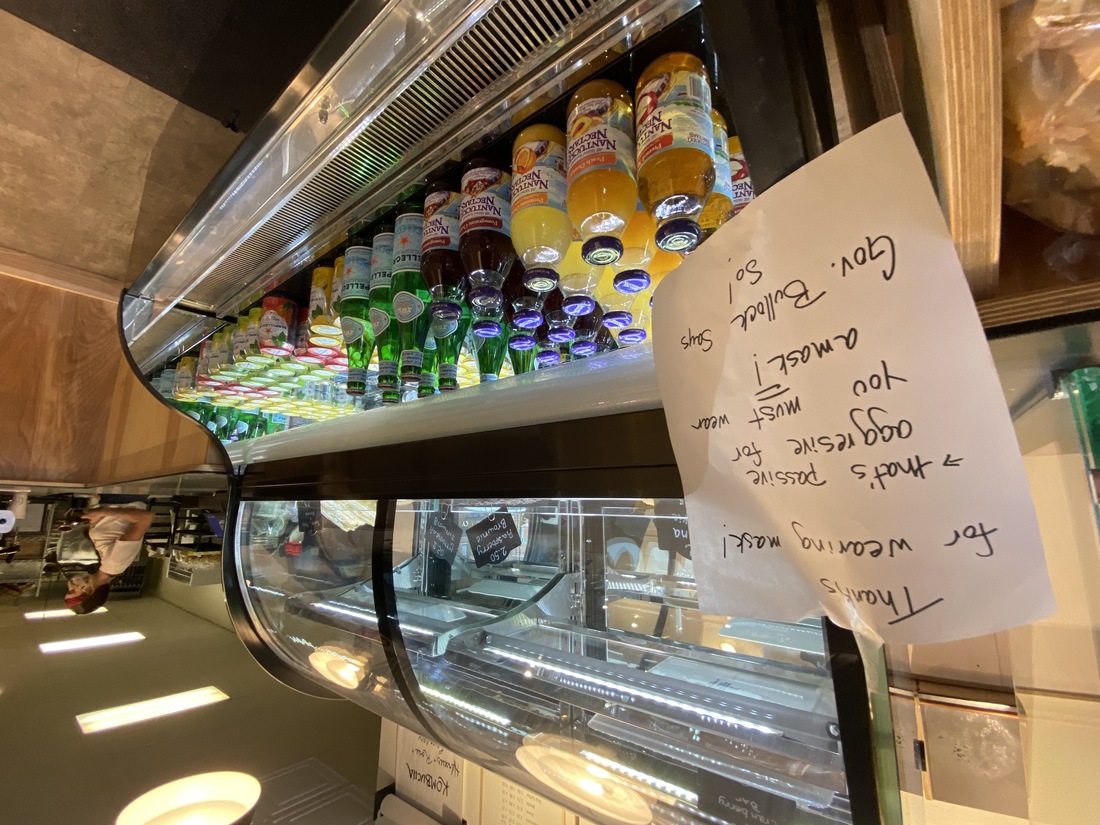 A sign at a coffee shop reminds customers that masks are required by Montana’s governor. The mandate, shop owners say, helps limit confrontations. 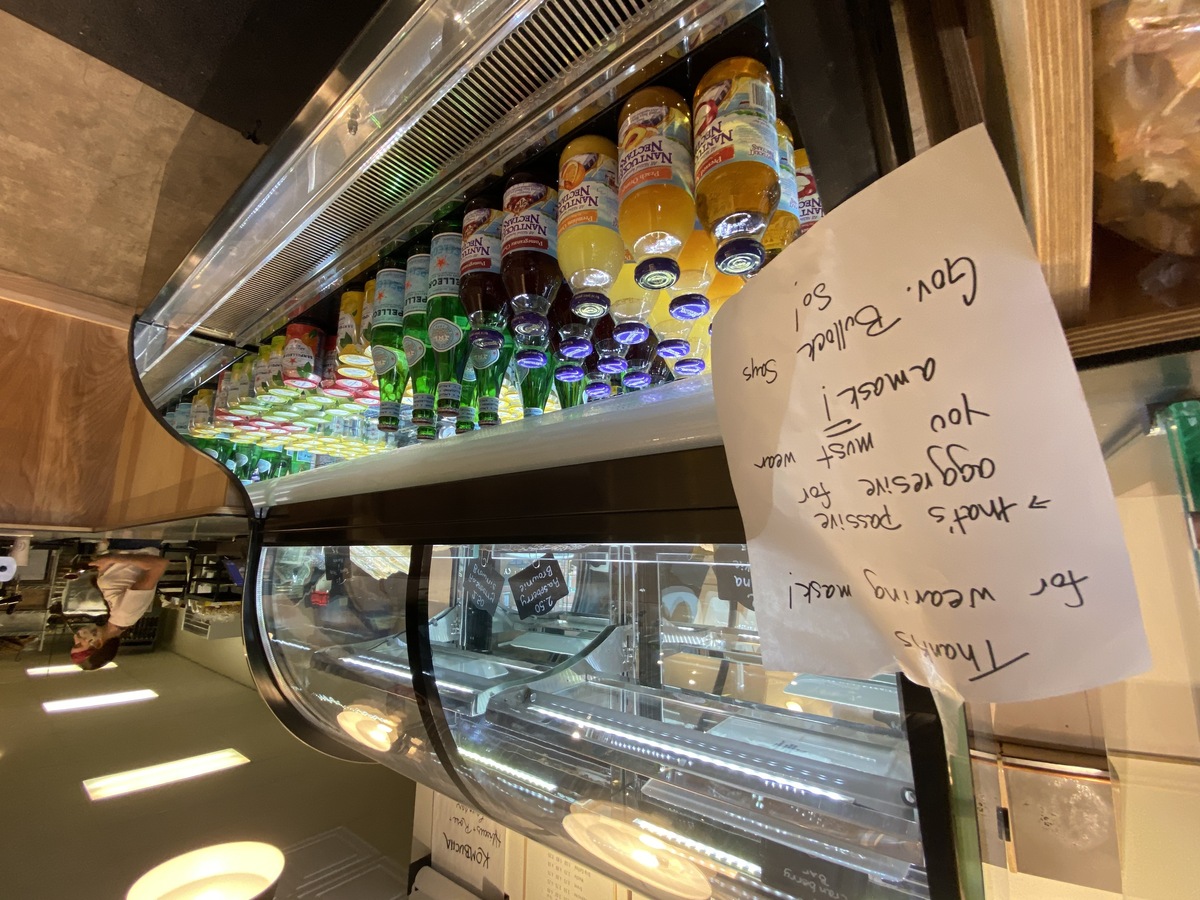 A sign at a coffee shop reminds customers that masks are required by Montana’s governor. The mandate, shop owners say, helps limit confrontations.

The confusion has consequences. In one Idaho town, the city council recently voted to table an ordinance requiring people to wear masks after four hours of heated testimony, despite public health officials warnings. In Flathead County, the public health board has twice voted down proposals to limit indoor gatherings at 500 people.

Randy Zuckerman, chair of surgery at Kalispell Regional Hospital, said the vast majority of the people he interacts with in the community and hospital are taking the virus seriously. A small, vocal, minority are not.

“The whole country has fatigue. Everyone is tired of this,” Zuckerman said. “The trouble is it’s here. It’s not going anywhere quickly, so we need to get back to the basics: social distancing, washing your hands, wearing a mask. We need to get back on that train.”

For health care workers dealing with misinformation, it can start to feel like they’re living in “two different realities,” said Joy Prudek, who works for St. Luke’s.

“And then they walk outside and they go to the store and have people look at them with disbelief and anger for wearing a mask,” Prudek said.

The disconnect is frustrating, she said, and disheartening.

To try to address conspiracy theories and doubts in the community about the virus’s threat, St. Luke’s is using every tool at its disposal. Employees are speaking at public hearings. They’re pushing out new numbers and information as soon as they get them. On social media, they’ve posted accounts from front-line workers about what it’s like to deal with COVID-19 patients.

Health care workers in other parts of the country are taking a similar tack.

In South Dakota, which recently led the nation for most deaths and new cases per capita, emergency room nurse Jodi Doering went viral after posting on Twitter that she has dealt with dying patients who still believe COVID-19 isn’t real.

“Your frontline health care workers are exhausted. We are scared that the hospitals won’t have the space and people to meet the ever-growing demand,” the letter said. “We call on Nebraskans to rise up once again to do everything we can for our state’s health and safety.”

Back in northwest Montana, public relations workers at Kalispell Regional Hospital are distributing flyers to local businesses, buying print and radio advertising and holding Facebook Live sessions with front-line workers as part of a broader “Stop the Surge” campaign.

The hope, said Mellody Sharpton, the hospital’s executive director of communications, is that by repeating the same message on multiple platforms, it will rise above all of the misinformation swirling below. 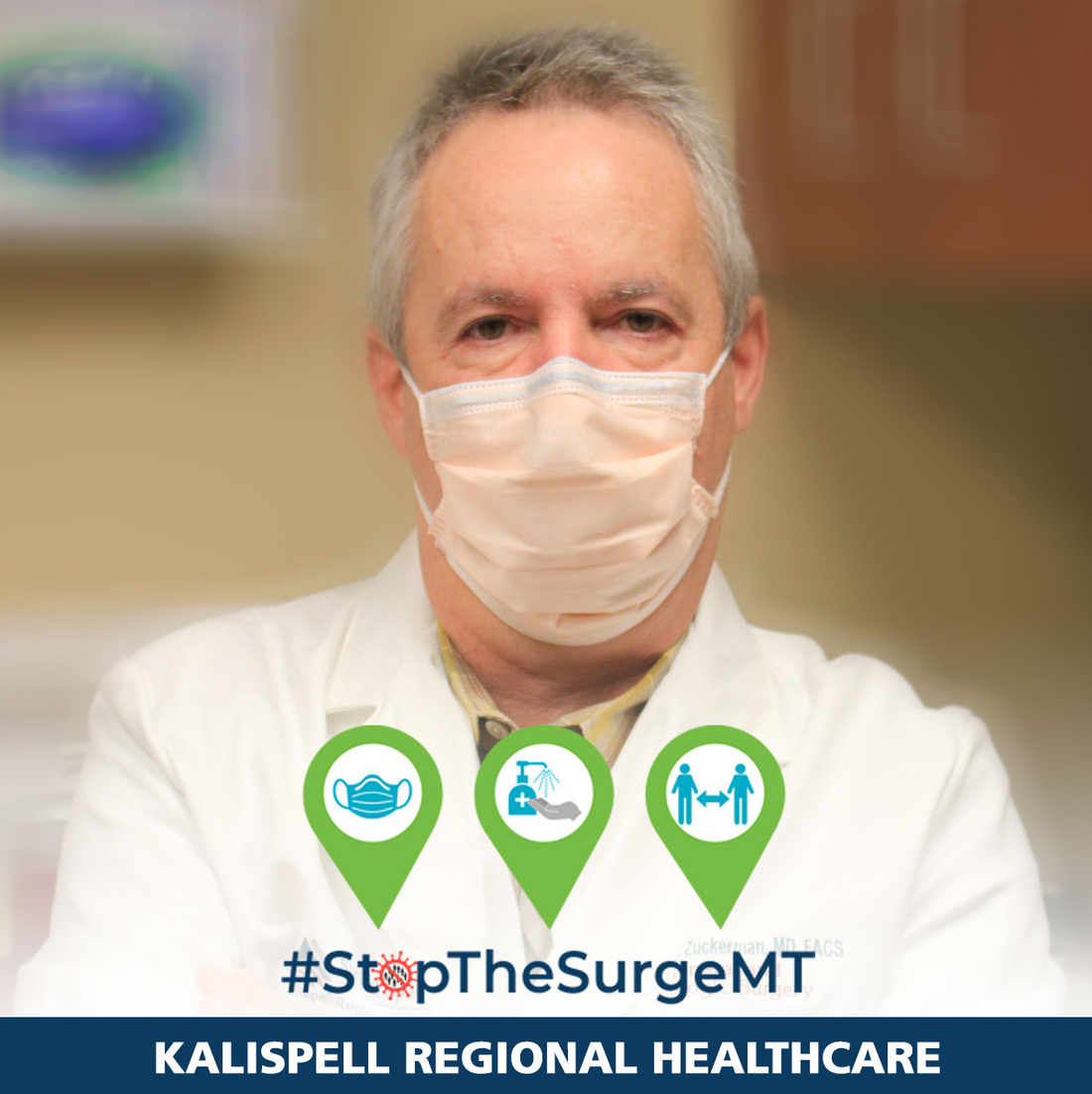 Kalispell Regional Hospital is recruiting front-line workers like Dr. Randy Zuckerman to tell personal stories of dealing with COVID-19 for their “Stop the Surge” campaign.

Public health experts say the need for clear, consistent messaging from front-line workers to national leaders has never been greater.

Ruth Parker, a professor at the Emory University School of Medicine, who studies health literacy, said that part of what has fed into the “chaos of content,” the nation is experiencing is the politicization of mask-wearing and the virus’s origins by President Trump, among others, and the fact that public health officials didn’t adequately express the uncertainty of COVID-19 in the early days of the pandemic.

“We missed an opportunity to to really take advantage of trying to work with people to understand what happens when something is new and you don’t know much about it,” she said. “You have to learn as you go.”

The effectiveness of masks is a good example. Scientists now know that wearing a mask protects the wearer, not just others. That point was only emphasized by the Centers for Disease Control and Prevention last week.

For those in the general public who are already skeptical of the government narrative, Parker said, shifting messages without clear explanation only breeds more uncertainty into a moment already loaded with it.

“It’s such a scary time and I think the climate is so ripe for being frustrated, being confused and probably not knowing what to do or how to navigate it,” she said.

It makes sense that people are downplaying or denying the virus’s existence, Parker said. It’s a coping mechanism.