Written on November 18, 2020 in Vital Sign by Neom Vision


I can hardly believe this… but after banging on about the inability to sterilize colonoscopes for the last decade; educating people on the risks and what you can do before and after to minimize the risks, I just found out there is now FINALLY a single-use, disposable, robotic colonoscope available and currently being used in Italy and Switzerland.

So of course, I had to rush onto the blog and tell you about it immediately!

The Endotics System of movement was first conceived by observing how Geometer moth larvae (a.k.a. inchworms) move. The Endotics Probe propels itself along the colon by mimicking the movement of the inchworm. Apparently, this hugely reduces or eliminates the pain. For this reason, your colonoscopy can also take longer, as it gently inches around your colon – rather than having someone ramming a garden hose up your butt. Wait. What – did I just write that? Can you tell my first and last colonoscopy was a rather unpleasant experience?

But getting back to the super exciting news: The entire apparatus is a sterile, single-use, disposable unit. As a professor said to a friend of mine: “We started with the single-use scalpel and now everything is single-use, except the one instrument we put into the dirtiest part of the body.”

Next time your doc suggests a colonoscopy, send them to this blog post, or to the company’s YouTube channel which has a number of videos showing you how the robotic colonoscope works and samples of colonoscopies and biopsies being performed.

So you might be wondering how I heard about this new colonoscope when not too many other people, doctors, etc know about it… Well, as you know, my books are sold into 80 different countries, and this blog gets pretty high rankings, so I’m often contacted by scientists and doctors.

Let’s just say I have a lot of friends. And this particular friend has not only operated this disposable robotic colonoscope, he has also experienced a colonoscopy with the device. Here’s what he has to say about it: 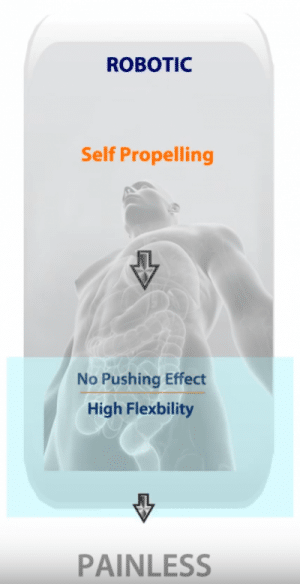 This clinical trial set out to assess the efficiency of polyp detection with Endotics vs. traditional colonoscopy. The conclusion was that Endotics “allows the visualization of the entire colonic mucosa in most patients, with good sensitivity/specificity for the detection of lesions”

I find it SO interesting that all of the research papers, including the manufacturer’s own poster at the world’s top GI conference, Digestive Disease Week (DDW), did NOT highlight the key, spectacular, differentiating feature that this device is sterile and disposable!

But then, we all know how terribly careful one must be when presenting anything that calls big Pharma/Med into question. And chances are, if they called attention to the lack of sterility issue, it may prompt some mega-Corp to squash them. Those of you who’ve been reading my blog for over a decade might remember when a company in Israel invented a disposable sheath for a colonoscope, which I was really excited about… and next thing you knew, the company had been purchased by a large American company and the sheath was never seen/heard from again. Just saying.