I suppose it fits the theme of 2020 to be witness to the one and only Hurricane Iota that will ever exist, and that too a cat 5 storm! Even though we barely have any idea of the damage this has caused a day after landfall, I’m sure they will retire this name after this season.

Here’s the satellite imagery from landfall to present, showing the decline: 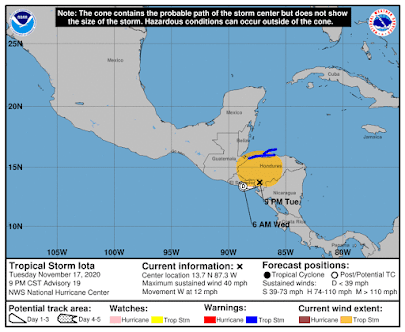 And the forecast shows that it will weaken and fizzle out by tomorrow morning. But hmm… I do see that it still has a very strong vorticity signal throughout the troposphere… hmm… I wonder if it’s actually stronger than the official intensity suggests, in which case there is a chance that it may cross over into the Pacific and re-form. We’ll know in a few hours if El Salvador manages to finish it off or not because it’s officially supposed to be a Tropical Depression by tomorrow morning.

I was planning to sign off on Iota today, but I guess I’ll be back tomorrow to wrap this one up.

DISCLAIMER:
These remarks are just what I think/see regarding tropical storms – not the opinion of any organization I represent. If you are making an evacuation decision, please heed your local emergency management and the National Hurricane Center’s official forecast and local weather service announcements. This is not an official forecast. If I “run away, run away” (Monty Python), I’ll let you know.
————————————–