Home Vital Sign Will the Silica in Bone Matrix Build up in my Gut?

Flowerlounge: The Podcast! | Listen To Your Gut

Why My House Has NO WiFi 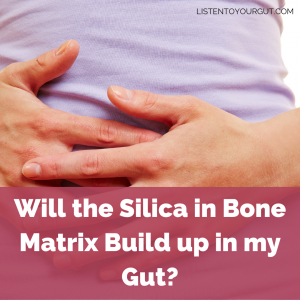 One of the awesome things about LTYG is the number of highly educated/intelligent readers I get – who then ask the best questions!

Here’s a recent Q&A exchange with a medical professional I wanted to share, as I think this information is beneficial to everyone who’s using the QuikPlus Bone Matrix, or QuikPlus Silica (atom-sized/nano minerals).

DOC: I am completing my third bottle of Bone Matrix. May I assume the cloudiness in Bone Matrix comes from the silica? If the silica is atomized then the particle size should be minimal. So why would it make Bone Matrix so cloudy? I would think that if the silica is diluted and atomized it should also be clear (like when I put fiber powder into water and it completely dissolves).

I worry about the silica building up inside my intestines if it’s more of a powder and is not truly in solution, and therefore it might accumulate in my gut. Your thoughts?

JINI: Because of its ionic charge the silica in Bone Matrix agglomerates quickly with the other minerals. That’s why it forms the clumps. When you first open your bottle of Bone Matrix, if you pour some out you will see that it is fairly clear. Once oxygen gets involved the agglomeration with other minerals begins. There is no harm or loss of efficacy associated with the agglomeration and you can use it as normal. If you purchase the silica on its own, with no other minerals, you will see it is perfectly clear and remains so during usage.

DOC: So the silica by itself does not clump, but in combination with the other minerals it does. Why does this clumping not create a potential residue inside the wall of the intestines, specifically an area of anastomoses that might otherwise already have a narrowing in it? Is there a potential for residue accumulation?

I utilize the product at least 3 times a day every single day, so if it clumps and does not easily separate that could become a problem.

JINI: We have no specific data or studies on your question with regards to atom-sized, picometer or angstrom silica. But what occurs to me is that because ALL the minerals are 100% absorbable, there should not be any accumulation issues…

However I did find some encouraging data for you on regular silica:

2. This comprehensive study suggests that whether excess silica is excreted in urine, or feces, depends on the form of silica ingested: 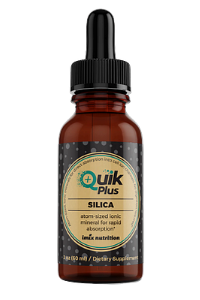 “The mechanism of gastrointestinal uptake of silica is not known, but the silica species in the gastrointestinal tract influences its absorption (64), as noted above. Simple uncharged species such as orthosilicic acid will interact very weakly, or not at all, with the mucosally-bound mucus layer, thus will be readily mobile and will permeate easily across the mucus layer. Indeed, orthosilicic acid is readily and rapidly absorbed and excreted in urine, and uptake occurs predominately in the proximal small intestine (62, 64). This is likely to be by the paracellular pathway or small-pore transcellular pathway and is unlikely to be energy dependent. In contrast, charged polymeric silica species will either interact more strongly with the mucus layer, through cation bridges, and thus be less mobile, and/or will be too large to permeate through the mucus layer. Thus, polymeric/colloidal species of silica that are not readily broken down in the gastrointestinal tract will not be significantly absorbed and will be excreted in faeces (64). Other factors that may affect the absorption of silica are discussed below.”

3. Lastly, this report talks about the difference between natural-source and synthesized silica, “Since silicon is the second most common element in our environment, it is continuously absorbed via the air or in food. Many natural foods, especially with a plant origin, contain high levels of silica. Therefore, it is virtually impossible to say just how much silica humans absorb each day. For synthetic amorphous silica (SAS) used in food additives the maximum level is up to 1500 mg per day…. The body excretes most natural and synthetic amorphous silica (SAS) before it reaches the bloodstream.

Food, especially food of plant origin, can contain high levels of natural silica (corresponding to a daily silica intake of up to 400 mg and more, but only a small part of this is reabsorbed). Beer also contains a large amount of natural silica, which can exceed 100 mg per liter. (Casey et al. J. Sci. Food Agric. (2010) 90, 784–788.) Since silica in beer is in a colloidal dissolved form, resorption may be higher than with solid food.”

Note: In addition to the agglomeration/clumping effect of the silica in Bone Matrix, you may also notice your teeth feel a bit ‘sticky’ after swishing with Bone Matrix. This is also from the Silica, since I put a high dose of silica in Bone Matrix as it is so beneficial for bones, teeth, hair, nails and connective tissue.

There is some cool data that suggests atom-sized (nano) silica reduces tooth sensitivity by ‘plugging’ the sensitive microtubles in teeth. So yes, it is fine to leave on your teeth after swishing – or you can rinse it off with a mouthful of water, your choice.

I hope that helps!